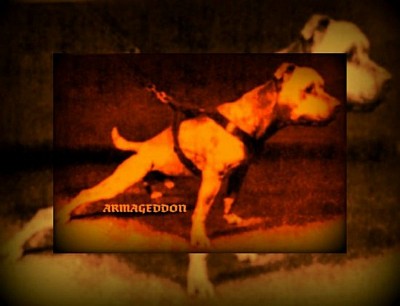 FICTIONAL: Throughout the history of the sporting American Pit Bull Terriers, no single dog has made quite the impact as Garrett's CH. Jeep, and that being the combination of not only his worthiness as a supreme pit dog, but the ultimate supremacy of his reproduction. Jeep was bred by James Crenshaw and sold to James Garrett as a young dog and was campaigned and brought to notoriety by James Garrett assisted by James Crenshaw. Jeep achieved his fourth win over Ozzie Stevens' Ch. Homer. This fight making history, for the caliber of these two dogs meeting in the pit is unusual in itself. Although, Jeep the victor, Homer, in his own rights, had proved to be just as good a combat dog and both dogs were truly entitled to the legacy that they have earned through this match.

Now that the formidable worth of Jeep has been established, we will go on to the greatest asset this dog ever possessed and that was his ability to reproduce a staggering figure of Champions, one Grand Champion and numerous one and two time winners. The conversation at many conventions always leads to great dogs and a dispute of which bloodline's are the best to utilize to get the highest percentage of game and winning dogs. I have often heard this one statement being passed when Jeep's name is brought up as to his high figure on the R.O.M. (Register Of Merit) list and that is, well look how many bitches Jeep was bred to create the amount of Champions he has sired. My answer to those dog men is this. Take three major pit dogs that are from outstanding bloodline's such as STP's Grand Champion Buck, six time winner, STP's Champion Toro and Burton's Grand Champion Hank, as these three were considered exceptional pit dogs and many utilized these three different bloods for the sole purpose of producing or establishing new lines from them. All three lived approximately to the same age which was ten years. Two were campaigned approximately the same time and died not to far apart, that being, Ch. Toro and Gr. Ch. Hank. Hank made his pit history prior to theirs, but was bred as many times as Jeep, if not more. Gr. Ch. Buck, probably second to Hank in the amount of his breeding's and Toro, who was bred to 23 different bitches during this period. The fact is all three of these great dogs combined together, produced about half the number of Champions as Jeep has. So common, sense will tell you how many champions doesn't hold water. In retrospect, dogs like Ch. Homer, Gr. Ch. Art, and Tombstone who was bred limited amounts of times and was still able to produce high quality dogs should also be considered. Certain dogs should be on the ROM list considering the number of times they have been bred, like: Jeep, Buck, Yellow, Frisco and Mayday to name a few.

Some of the crosses which are well known where Jeep created some great dogs and the blood seems to click the best with are Jeep/Red Boy and Jeep/Rascal.

Ch. Jeep was born in August 1976 on the yard of James Crenshaw, in the famous litter of Finley's Ch. Bo ROM to Crenshaw's Ch. Honeybunch ROM. That produced four champions. The most famous of the four was Ch. Jeep ROM. But there was also Crenshaw's (Super Gnat's) Ch. Charlie, who has been said to have been a better pit dog than Jeep. Ch. Missy who is seen in a lot of pedigrees today, and Swetman's Ch. Holly, who was said to be a terrible biter with lots of ability. This was a great litter that was made once, for reasons that I don't know.

James Crenshaw has stated publicly that he never liked Jeeps style personally, as Jeep was never a finisher in his eyes. This however severely contradicts Crenshaw's choice of dogs that he's personally based his yard on, as they were primarily off of Jeep, and crosses that he made with Ch. Rascal for the most part, and in later life he was well known for using Jeep/Red Boy dogs.

CH. Jeep is believed by many to be one of the best match dogs of his time.

Garrett's Ch. Jeep ROM defeated Pylant's Ch. Kato at 43 pounds in :28 minutes. Cooper's Weenie also at 43 pounds in :58 minutes. Stinson & Stepp's Black Dog, who was said to be a three time winner at 42 pounds in two hours and five minutes. And, for his fourth and final match we went into Ozzie Stevens' Ch. Homer, at 43 pounds and won in 3:45. This was one of those classic matches, that history is made from. Two great game dogs met, and only one could win. One created a legacy and the other a dynasty. 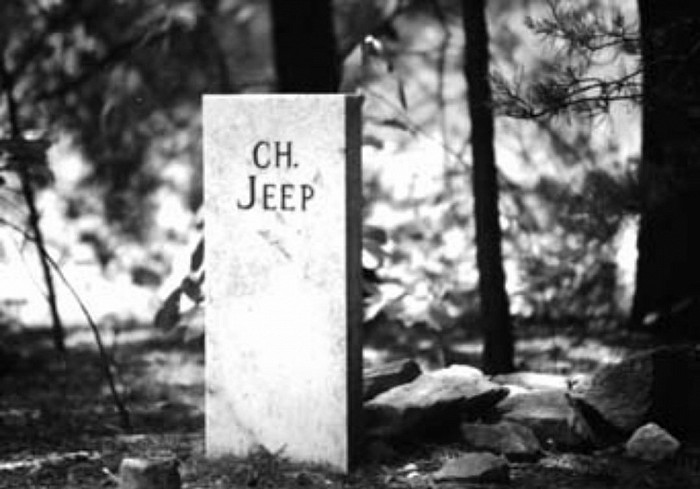